Why is the concept of urban farming so rewarding and lucrative? Easy – there’s a high demand for fresh, natural products that complement the healthy lifestyle of everyday folks. A close proximity to towns, villages, or cities brings significant traffic to these farmer’s markets that is not seen in typical farms located far away from urban populations. That is why those skilled in the art of cultivation of fruits and vegetables see fit to capitalize on this aforementioned demand by bringing modern-day agriculture to the forefront – produce that is virtually chemical-free via sustainable farming – and into people’s hands. Donald Virts, owner of CEA farms, is fully committed to this endeavor.

Virts himself hails from a farming legacy that spans 12 generations. The first of which set up shop in Loudon County, Virginia, just outside of Washington, D.C. in the late 1700s. As traditional farming evolved, so did the farming techniques utilized for growing crops of the highest quality. Virts abides by a “farm to forks” concept, which entails a showcase of modern urban farming, where crops are grown in a controlled environment within a greenhouse. His M.O. – to the delight of many around the farm’s location – is to “grow and provide the healthiest food possible,” and to do so in a highly sustainable and productive way. His focus is also heavily placed on using renewable energy and lowering energy consumption. To include these benefits in his newly constructed farm store, he decided to use spray foam insulation as the catalyst.

This project was powered by the collaboration of three companies: Demilec, Honeywell, and Nova Spray Foam. During the farm store project, representatives from all three companies were present onsite.

Here’s the breakdown: Demilec, a top-shelf spray foam systems house, supplied a brand new type of 2 lb. closed-cell spray polyurethane foam for its inaugural commercial application. This new foam – which is yet to be named – is Demilec’s first product formulated with Honeywell’s Solstice® Liquid Blowing Agent (LBA). Solstice LBA has an ultra-low global warming potential (GWP) of 1, which is 99.9 percent lower than the HFC blowing agents it replaces and is equal to carbon dioxide. Formulating their foam with Solstice LBA follows Demilec’s motion to phase out HFC blowing agents from their entire product line – both existing and future formulations – and to reformulate each one with this hydrofluoro-olefin (HFO) technology. The collaboration between Demilec and Honeywell forges a new wave of spray foam products that carries environmental stewardship over, and both parties are justifiably enthused.

“Solstice LBA is a very important part of Demilec’s future in that we have already made commitments with this latest product, which will be launched in 2016,” says Paul Valle, President and CEO of Demilec. “We’ve made a further commitment that by the end of 2017 all of Demilec’s closed-cell foams will be utilizing this blowing agent and this technology.”

Laura Reinhard, global business manager for spray foam at Honeywell, is delighted that Solstice LBA is being adopted at Demilec and other leading system houses.

“To have Demilec on board with Solstice LBA system is really exciting for us,” notes Reinhard. She claims that there are two main trends driving adoption of Honeywell’s blowing agent. “First, builders and architects are looking for high performance insulation with better energy efficiency and environmental attributes. A second driver is the global regulatory movement to phase out HFC blowing agents. HFCs have a much higher GWP than Solstice LBA, which is based on HFO technology.”

Last but certainly not least, Nova Spray Foam, a Virginia-based spray foam contracting company, was given the momentous task to apply this new foam to the farm store – the first installation outside of a lab. This entailed insulating a new, 40’ x 70’ building to be used as a market and restaurant at the Virts’ farm location. Nova’s owner and operator Ken Thacker originally brought spray foam to Virts’ attention for an insulation application to a greenhouse that was attached to the farm store. After said application was completed, Virts was so impressed with the energy-efficient benefits that spray foam provided for the cultivation of his crops that he green lit the insulation project of the farm store without a second thought. Virts, an advocate of all things “Green,” was pleased to hear that Nova would be using an even higher performing product with an ultra-low GWP this time around.

“He knows that this is a product that is going to provide sustainability,” says Thacker. “He has seen the results and he knows that it works. For a person that advocates the use of green materials, he is partial to the fact that Demilec’s foam is made with recycled materials.”

Indeed, it is. So much so, that Demilec estimates they recycle nearly 35 million bottles a year that go into their insulating foam line, which they are now coupling with the HFO blowing agent that was utilized to formulate the foam featured in this project.

Originally, the insulation project consisted of applying foam to the underside of the roof and the exterior walls. However, Virts wanted to preserve the historical architecture of previous farming generations, so he had incorporated antique beams from old barns to be the building shell, which, while aesthetically pleasing, required extra protection and attention from the Nova crew. Rather than installing the foam to the exterior walls from the inside of the building, Thacker decided that spraying the walls from the exterior of the building was an equally effective method that would mitigate the risk of overspray damage and still achieve a proper building envelope seal.

Since there was still the application to the underside of the roof to consider, the four-man Nova crew masked off the antique beams using plastic sheeting for protection. Additionally, the crew masked off the floors, the window openings, a few newly installed freezer units, and the bathroom openings. To get to the peak of the roof, the crew operated two man lifts with fall protection throughout the project. To ventilate the work area, the crew had two three-foot industrial fans exhausting air out of the building.

Safety was paramount during this project. The crewmembers wore PPE consisting of Tyvek suits, North and 3M full-face respirators attached to a fresh air supply system, gloves, and steel-toed boots. Safety guidelines were closely followed through the SPF application, including proper signage placed at the site’s entrance that read, “No Entrance Without PPE.” This meant that representatives from Demilec and Honeywell that were present had to wear respirators at all times while inside the building. David Wilkes, research chemist and lab supervisor for Honeywell, was onsite during the installation. He noted that safety is always of key importance and that the Nova crew did a great job enforcing it.

The Nova crew used two Graco Reactor E-30 proportioners for the foam application. By way of a Graco Probler P2 Plural-Component Air-Purge Gun, the Nova crew installed three inches of foam to the underside of the roof and two inches of foam to the walls of the building’s exterior. It took two days and total of four sets of foam to complete the application. Foam in place, Thacker revealed that he was impressed with Demilec’s new system’s performance.

“The crewmembers liked the foam very much,” he notes. “It has good adhesion, which yielded greater board footage through the application. The crew liked the fact that it offered little or no odor at all, and also the control it had for exterior and interior applications. We look forward to spraying it a lot in the future.”

The foam’s trial run proved to be a success. Tom Harris, Vice President of Building Science and Innovation at Demilec, praised the foam’s results. He says, “The new foam has exceeded our expectations since it performed even better than we anticipated in this project. The advantages of the Solstice product that include superior sprayability, superlative adhesion to a multitude of surfaces, and the excellent solubility of the blowing agent in the resins side make it much easier to process. This all made for a smooth installation with exceptional results.”

Valle also added his own kudos about the project, and further highlighted the collaboration with Honeywell that birthed this new closed-cell foam. “Our experience with Honeywell on this project has been nothing short of amazing. This is a true partnership starting with the technological sharing of best practices, as well as helping with formulations. But we are taking it further into the business development part of the program. We’re looking at the commercial application of this product and, most recently, how we market this solution to the rest of the world.”

As far as Virts and his newly insulated farm store goes; he is ecstatic to be able to provide his fresh products to visitors in an energy-efficient environment that will be comfortable to be in year round. Furthermore, he wants to augment his original greenhouse design and break ground on future greenhouses that will subsequently be insulated with this closed-cell foam. Unlike traditional greenhouses where temperature fluctuations can impact crops, the insulated environment will be controlled by way of the insulation, making it ideally suited for the produce to grow. 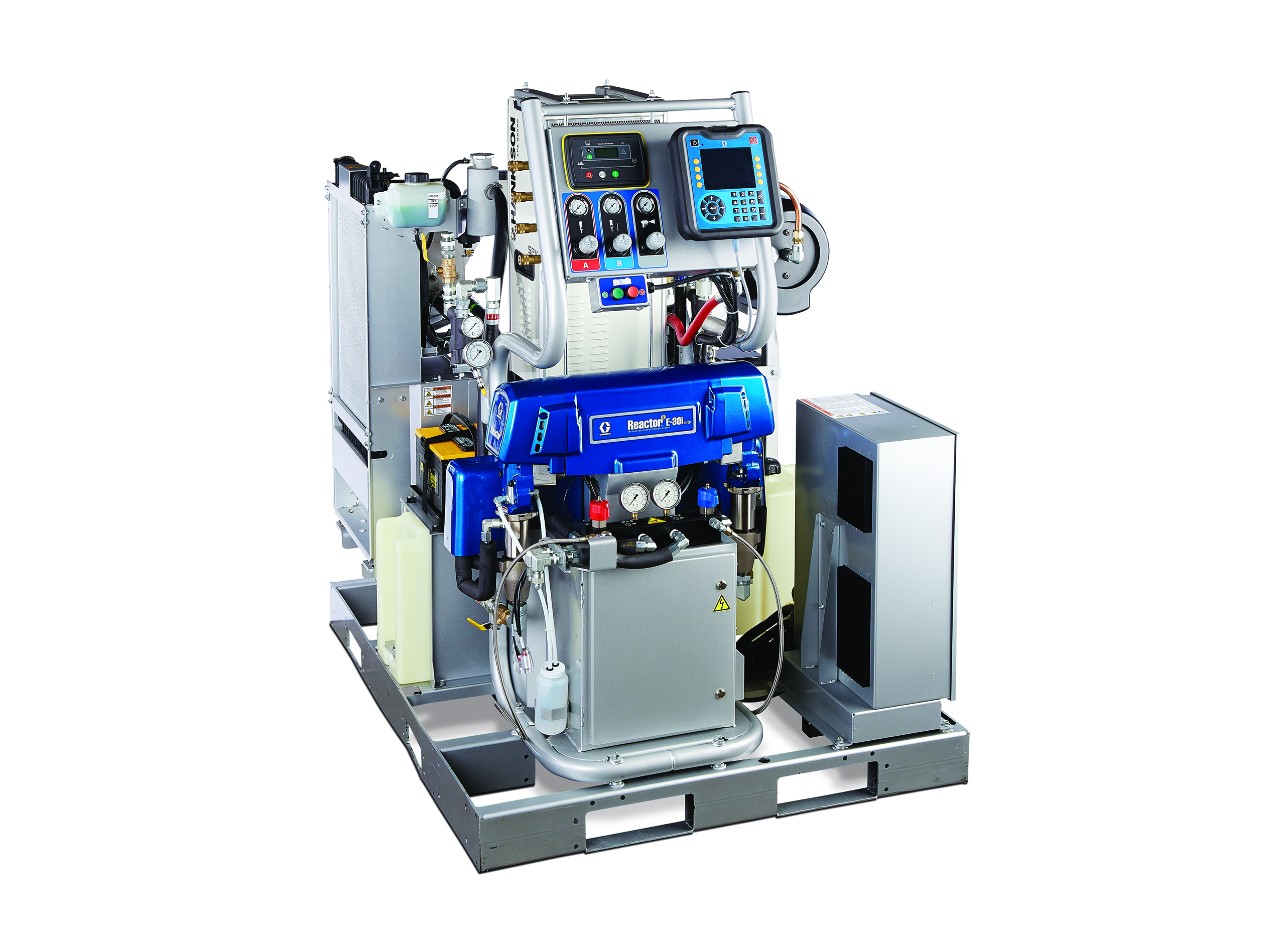 What you need to know before spray foaming an attic

Before spray foaming an attic know there are many building components in a home that are hidden behind drywall or just out of sight. As an architect in the Washington area, I’ve worked with numerous Read more…